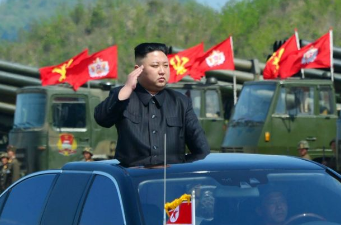 North Korea may be the most oppressive place on Earth for Christians. It's a totalitarian communist state, where believers are forced to hide their faith entirely - even at times from their own spouses, parents, and children. Due to tyrannical and ever-present government surveillance, gathering for Christian worship or fellowship is next to impossible.

What's worse, gross idolatry is mandated by lethal force. Worship of the ruling Kim family is required of every citizen of North Korea. Those who don't comply are arrested, imprisoned, tortured, or killed. Entire Christian families are banished to hard labor camps, where unknown numbers die each year from beatings, overexertion, and starvation. Those who attempt to flee to South Korea through China risk life imprisonment or execution.

Not only is North Korea cloaked in spiritual darkness, but the nation announced on Sunday that it is prepared to sink a U.S. aircraft carrier in order to demonstrate its military might. From Pyongyang, the North Korean dictator Kim Jong-un seems ready to wage war. Jong-un will ensure his regime's survival at all costs. One emotional, impulsive outburst on the part of this very unstable man could result in hundreds of thousands - or even millions - of casualties.

Rehearsals for an impending disaster have long been underway. Every two months, always in the early afternoon, the sirens begin wailing in Seoul. Cars and buses screech to a halt, civil defense officials take up their positions at busy intersections, and volunteers wearing yellow armbands guide pedestrians into the nearest shelter. There are literally hundreds of shelters in the South Korean capital.

As two Japanese navy ships joined a U.S. carrier group for exercises in the western Pacific, President Donald Trump ordered the USS Carl Vinson carrier strike group to sail to waters off the Korean peninsula in response to rising tension over the North's nuclear and missile tests - as well as its threats to attack the United States and our Asian allies. The stakes are now high, and this is a somber moment in world history.

As of this blog posting, North Korea remains defiant: "Our revolutionary forces are combat-ready to sink a U.S. nuclear-powered aircraft carrier with a single strike," threatened Rodong Sinmun, the newspaper of the North's ruling Workers' Party. Friends, where there is no God, there is no peace.

One may question North Korea's military capabilities when it comes to effectiveness on the ground, ballistic missiles, or even nuclear capabilities, but most experts agree that the artillery units being tested this week present a "clear and present danger" to many parts of the world, including American allies. It's a wake-up call for everyone who's breathing.

Christianity once flourished in the north as well as in the south of the Korean peninsula. And, despite extraordinary persecution under the Kim dynasty, Christianity has survived in North Korea - even under the most brutal of circumstances. Let's face it: Christianity's continued existence challenges the current Kim's rule. That's one of the reasons why his behavior is so unpredictable, and one of the reasons why he hates America. You see, when it comes to pride, the gospel is also a clear and present danger.