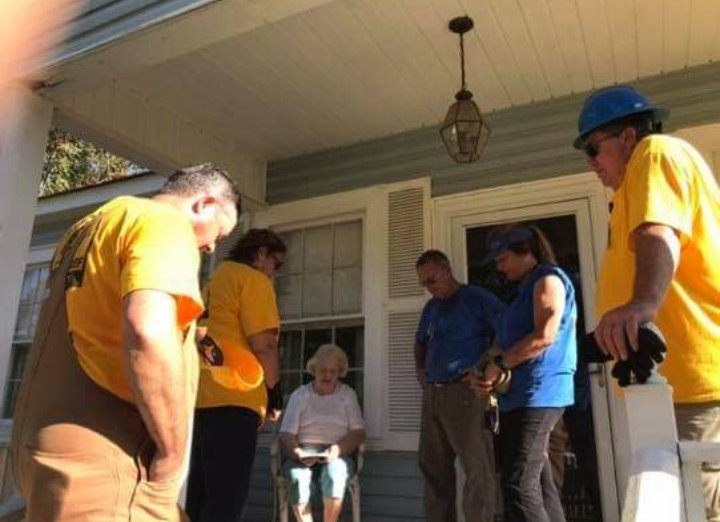 The 54-year-old Benton, Ky., woman had longed for an opportunity to work on a mission with DR volunteers, but her health had kept her from doing it. A pituitary tumor had caused uncontrollable weight gain and led her to be wheelchair-bound in most public places.

So doing the work of a Kentucky Disaster Relief volunteer seemed hopeless.

But surgery took care of the tumor and she lost more than 150 pounds in 18 months. Because of that blessing from the Lord, Fondaw said she will be forever thankful.

"Now that God has blessed me to lose all this weight, I want to pay back what was given to me," she said. "I will be a Disaster Relief person until I can no longer walk."

Fondaw got the needed introductory training and volunteered to help as a team was recently dispatched to Alexandria, La. As for the physical part of her job, she pulled brush - something she could have never done prior to the weight loss - but it was the spiritual and relational part of being on the Disaster Relief team that meant the most.

She made forever friends, bonding with the Kentucky team and others from Tennessee, Mississippi, Texas and even Alaska as everybody came together to serve families who had been through back-to-back hurricanes without much hope for help.

There was a lot of pain and heartbreak in the area and Fondaw was more than willing to provide them with uplifting encouragement. They took limbs and trees off rooftops and cleared the ground where other giant trees had been knocked down. Chainsaws were humming nearly nonstop, and the well-equipped Kentucky DR teams did their work physically and then spiritually.

"You know, it's really hard to even find the words that can sum up what I went through and the experience I had," she said. "You can use words like, 'It was amazing,' 'it was a blessing,' 'it was awesome' but those words don't really say all the things and all the emotions I felt from my experience. I guess to me I was a witness to God's grace and God's mercy. I don't know any better way to say it."

Fondaw said she was on a small team of workers who hardly ever stopped. But it wasn't the physical work that was most important, she said.

"The work was just a side part of it," she said. "Getting to spread the gospel with these people is what mattered the most."

She said each night was a new experience as the groups came together and shared the ways God was working in their areas. Fondaw was captivated by the passion of the Disaster Relief volunteers who told their stories, many with tears in their eyes, about how God was blessing them in so many unique ways.

"I had several personal experiences myself," she said. "It was amazing, so amazing."

Fondaw said she was clearing brush one afternoon when the woman in whose yard where they were working caught her eye and motioned for her to come over. The woman had just returned from getting the results of a CAT scan and a diagnosis of cancer.

"It has to be God that picks that right person," she said. "The lady motioned at me to come and talk with her. She said to me, 'I'm young, I'm healthy and I want this out of me.' I told her, 'God protected you through these two storms because He has a plan for you.' She was like, 'Can I have a hug?' With all the COVID stuff going on and we all wear masks and do everything we're supposed to do, I said, 'Yes ma'am, you most certainly can!' I hugged her tight as any of my children. I called it a 'Momma hug.' She was a Christian but I felt a connection. It brings tears to my eyes even today."

Her new friend's name is Michelle and she plans on staying in touch with her and has already sent cards of encouragement. Fondaw said the Lord told her that wasn't enough so she is crocheting a prayer shawl for her as well. She is asking for others to prayer for Michelle V. as well.

All of that came because she volunteered for Disaster Relief.

Nobody has to sell her on the value of what it means, and she will be someone who recruits others to participate. Her husband has already signed up for training in January.

Fondaw is a member of Zion's Cause Baptist Church in Benton with Pastor Charles Frazier, who has invited her to testify in front of the church about her experience with Disaster Relief.

Fondaw said more volunteers are needed, especially youthful ones, to do this important work. She said a team from Alaska flew into Louisiana to help who was made up of workers in their early twenties.

She made the trip to Louisiana with two women from Benton she'd never met but became dear friends with by the time the trip was over. There were other relationships developed through the two weeks she was there.

"I want other people to experience what I experienced," she said. "I'll never be the same."