God is in total control 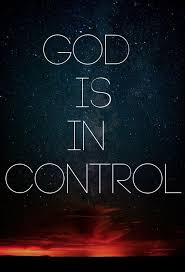 Praise the Lord I am feeling better and beginning to regain some of my strength. I want to thank everyone for your prayers. Pneumonia is a formidable opponent, and it takes a while for the body to defeat the infection and manage the healing process. I received an email yesterday from a sweet lady who attended a church with us back in 1997. The church was called, "Christ Fellowship" and was facilitated by Dr. Bob Neff and Denny Strickland. I was an ordained elder and served as one of the leaders of our worship team. She said I used to sing a song called, "Total Control" and it had been playing in her head for the last few days and she wanted to know if I could send it to her. The Lord inspired me to write that song in the mid-nineties as it declares that God holds the universe in the palm of His hand and how nothing is greater than His authority. I've recorded a few songs through the years and you can listen to the acoustic version of this one on the homepage of my website. Anyway, I was humbled that anyone would remember a song from over 20 years ago, but I have been praying that God will continue to use the music as a blessing to others. Later in the day I ran into a friend at Walmart and he also mentioned that God is in total control several times. Sitting in my office last night, I thought about these two encounters and believe they were not a coincidence. Our heavenly Father is saying that He is still on the throne and for us to keep our eyes focused on Him and trust Him with all of our heart. This is not the hour to panic but instead we can embrace His promises which cannot fail and listen to His still small voice. Hebrews 11:6 says, "But without faith it is impossible to please him: for he that comes to God must believe that he is, and that he is a rewarder of them that diligently seek him." It takes determination and perseverance to embrace the spiritual reality that doubt is the opposite of faith.

Remember when Christ was asleep in the ship and the disciples were afraid they were going to sink in the raging storm? Jesus simply spoke to the situation and calmed the wind and the waves and He is still reminding us there is peace and rest in the secret place of the Most High.

This is a difficult time and we are heartbroken for many families as we continue to pray for peace, comfort, and healing. There are so many voices speculating about this but we should be careful with our opinions. We do not really know why this has come upon the world or what will be next however, there are some things that we do know! We know that God is never surprised, shocked or worried. He knows everything that is going to happen before it happens. We know that He has all authority and all power and is sovereign to direct all things according to His perfect wisdom. We know that He is in total control and will only allow things to happen as it agrees with His divine will. It's true that we do not understand why He allows certain things, but are we really supposed to know everything? Do we have the capacity and ability to understand the depths of His wisdom? Probably not, considering we can hardly comprehend the basics of prayer and obedience. Besides, isn't the foundation of faith trusting in what we cannot see? We know that He loves the world and is a refuge and a strong tower to those who love and obey Him. We know that God has revealed in His Word that there will be perilous times at the end of the age. As His children, we should not be surprised or alarmed, but instead we should be strengthened and encouraged to see His prophecies be fulfilled. We know the kingdoms of men will crumble and that evil will continue to surge until God finally says, enough is enough just as He did in Noah's day. We know that Jesus is the hope of our salvation and we can stand on His infinite truth. We know He is coming soon and now is the time to prepare our hearts for His glorious return.