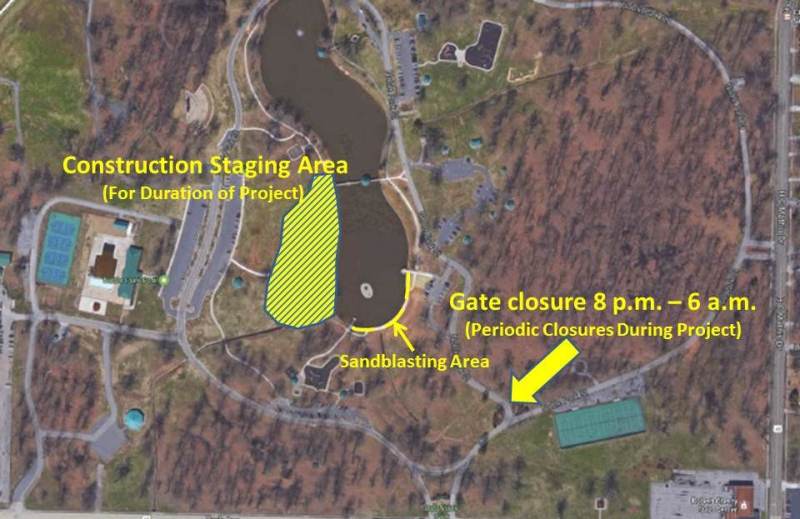 PADUCAH, KY -- Access to the southern end of Noble Park Lake will be restricted at times over the next several weeks to facilitate Phase II of the Noble Park Lake Bank Stabilization Project. At times over the duration of the project, the gate that provides vehicular access to the roadway along the east side of the Noble Park Lake will be closed from 8 p.m. until 6 a.m. The main park gates and the park's outer loop road will remain open during normal park hours.
Recently, the level of the lake was lowered to expose the steel sheet piling retaining wall that was installed in 2014 on the southeast side of the lake. During the overnight hours, the contractor will be sandblasting the existing retaining wall. After sandblasting, the contractor will apply two coats of a black protective epoxy which will increase the wall's life expectancy.
Also this week, the contractor will begin installing orange construction fencing on the southwest side of the lake to create a staging area and to restrict access to the project area for the next several months.
In addition to the sandblasting and coating of the existing retaining wall, this project includes the installation of approximately 600 linear feet of steel sheet piling with a concrete cap and epoxy coating along the south and west bank of Noble Park Lake. The sheet piling creates a retaining wall to stabilize the bank erosion.
In February of this year, the Paducah Board of Commissioners approved a $242,980 contract with Youngblood Excavating & Contracting, LLC (YEC) for the Noble Park Lake Bank Stabilization Project-Phase II. Phase I was completed in 2014.
Read more from:
West KY News
Tags:
carlisle county news, disaster relief, home, hours, labor, material, volunteer
Share: