Tuning in to Sunday services

Television preachers have a new fan...me! The pandemic brought changes of all kinds into our lives and my form of worship was one of them. I was born on March 25th and I attended church for the first time on Easter Sunday in April of that very year. Every Sunday from then until April of 2020, I was at church unless I was really sick or out of town. I never dreamed that churches, along with most everything except Wal-Mart, would close their doors when a virus threatened to infect the world.

I give so much credit to the people who first suggested putting sermons on Facebook for the spiritually starved public. Pastors from all corners of the world began preaching from their kitchens, dens and even garages and posting their sermons online. I watched on my TV with a Facebook Live connection. Now that our services have resumed at Spring Bayou, I go to our early service at 8:30, but I still watch several of my favorite pastors on Sunday afternoons and throughout the week.

Bro. Rick Miller was my pastor at Mississippi Baptist Church when I was in high school. He is now the pastor at Symsonia Baptist Church, and I've visited there many times. Symsonia is a good distance from where I live, and I have missed hearing Bro. Rick. Thanks to Facebook Live, I've been able to tune in and listen each week; my mom has enjoyed listening to Symsonia, as well. Sometimes it's just good to re-connect with people from your past, and every sermon I've heard has been such a blessing!

When I started attending Spring Bayou several years ago, Bro. Terry Tipton was the pastor. Over the years, I became good friends with he and his wife, Leah. It was heartbreaking when they left western Kentucky, but I had no doubt God had called them to the mission field of eastern Kentucky. Since their move, I've attended their church once or twice a year, but now I have the opportunity to tune in each week.

In addition to the pastors listed above, I've also watched a revival at Faith Baptist Church where Daddy's nephew, Billie Prince, is the pastor and have listened to several gospel music concerts that were live streamed. In the Bible, Romans 8:28 tells us, "And we know that all things work together for good to them that love God, to them who are called according to His purpose." I truly believe the Gospel is being heard more now than ever, and for that I am thankful!

Read more from:
The Carlisle County News
Tags:
None
Share: 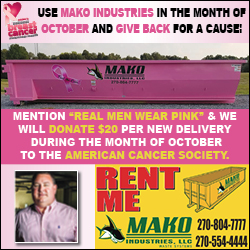