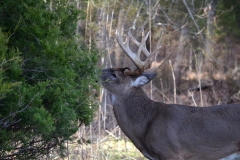 I've only been aoudad hunting two times in my life, and I have yet to even see one. Both hunts were not under the best conditions and/or times. My recent one was lots of fun, but I was not there during the best time of the year. I was scheduled to speak so I didn't have the luxury of choosing a better time. I will plan differently next year. While I didn't see an aoudad, I did see a number of coyotes and loads of wild hogs. During the first few days of the hunt, I decided to pass on everything except what I came after, afraid that any unnecessary shots might scare off any aoudad that might be close by. By the end of my hunt, I decided to lower my standards. As a result, two coyotes, and a monster boar. Was I disappointed? Not really. Yes, I would have loved to have harvested what I came for, but I'm also happy that I was able to get something that was much, much better than nothing. And don't get me wrong, I love hunting coyotes and hogs as well. So, I had plenty of fun and enjoyed great company.

I'm reminded of my prayers when I think of my recent hunt. I'm one of those guys who asks God for the best and most. My thought is, I would hate for him to be willing to give me something really big, but I failed to ask for it. I had rather ask for Mars, knowing that the moon is still in play. And there's just something neat about me asking God for, say a million dollars, knowing that he has it and wouldn't miss it if it were gone. And knowing I'm his child, and he loves me, and wants me to have good things - even some things that are just for my enjoyment.

Is that your view of God? I hope so. I hope you're not one who believes his gifts are all contingent on your obedience or your goodness. My what a terrible place we would all be in if that were the case. No, the foundation of God's goodness does not lie in the recipient of his blessings, but in God himself. HE is good. HE is gracious. And his goodness flows from his very nature. He chose you in order that he might extend his love. Don't let someone or some faulty view of God, keep you from receiving that love. And don't let them keep you from asking him, your Heavenly Father, for the blessings he wants to give you, for no other reason, but just because you are his.